Quick. Can you name the Ivies?* What about the next tier of just-as-selective schools?**

If you can rattle off Ivy League schools like you can the names of your siblings, you’re likely a student – or the parent of a student – who’s a superstar. These kids have all the boxes checked. A weighted GPA well over 4.0. Extracurriculars that run wide and deep. Leadership positions in multiple clubs, sports, and organizations. Community service that would warm the heart of Mother Teresa. And a pocketful of recommendation letters that are sure to open doors.

With those stellar credentials, why shouldn’t a student push the early action button for multiple Ivy League school applications? After all, the student has been aiming for the stars their entire lives, and an Ivy League (or similarly selective) school is the next logical step.

Maybe. But maybe not. Here are five reasons to reconsider.

1. An Ivy League school education may not benefit the student over the long term. In his brilliant 2013 Zeitgeist Americas talk, journalist and author Malcolm Gladwell (The Tipping Point, David and Goliath) discusses what he terms Elite Institution Cognitive Disorder (EICD). Gladwell makes the case that relative position in a hierarchy matters more than absolute position. Put more simply, a student who ranks in the middle of an Ivy League class believes they’re a loser, while a student who ranks near the top of a mediocre school’s class believes they’re on top of the world. In other words, it’s best to be a big fish in a small pond.

Here’s the video. For those with an Ivy League fixation, it’s worth every one of the 19 minutes it takes to watch:

2. You may pay top dollar. Ivy League schools don’t give merit-based scholarships, regardless of the student’s GPA or extracurriculars or latest invention. All scholarships at Ivy League schools are need-based. The good news is that the Ivies (and many equally selective schools) meet 100 percent of financial need as calculated by the CSS Profile. (If you’re not familiar with the CSS Profile, think FAFSA but even more intrusive). If a student has high financial need, they may get close to a free ride. But if they’re a superstar student, they can likely get a free ride at any number of other great universities – colleges where they can persist and shine.

3. For an undergraduate, what matters is the diploma. Ask anyone who graduated from college more than a decade ago how often employers and associates inquire about the person’s alma mater. Chances are, it’s not often. The importance lies in obtaining the degree, not the school attended. 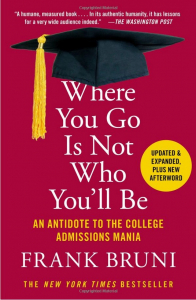 4. The alma mater doesn’t determine a student’s destiny. Frank Bruni’s book, Where You Go is Not Who You’ll Be: An Antidote to the College Admissions Mania provides an important perspective on those who enjoy wild success after graduating from less exclusive universities. For those still hanging their hopes on an Ivy League school application, pick up Bruni’s book after watching the Gladwell video.

5. Exclusivity doesn’t equal quality. Ivy League schools are undoubtedly good, but there are measures of quality other than selectivity. Students who consider other metrics may find that quality manifests in different ways. Consider, for example the 44 “Colleges that Change Lives,” which include the quirky Reed College as well as Kalamazoo, Allegheny, and Willamette.

If an Ivy League application is off the table, why did the student grind through those AP classes, participate in those late night practices, and show up to volunteer at the food pantry every Saturday morning? Because all of those actions build character, reinforce the value of persistence, and build the foundation for a lifelong love of learning. When application time rolls around, spend time looking for the gems that match the student’s passions and talents. Those ivy walls will still be standing when it’s time to apply for grad school.

About the Author: Sally Smith

Sally Smith is a college and scholarship coach who helps families navigate the path after high school. She facilitates in-person and online group workshops, and provides one-on-one coaching on a variety of topics. Sally can help families gain an understanding of the college selection, application, and decision process; pinpoint scholarship opportunities; write effective college admission and scholarship essays; decipher the FAFSA and CSS Profile; gather stellar letters of recommendation; and develop strategies for college entrance testing and test preparation. To learn more about the services she provides and to schedule a free 30-minute consultation, visit https://www.pathwayscollegecoach.com.